Our Show On NBC & ABC

WATCH! Cardinal Cowboy And The Judge Reflecting On Past Celebrity And Local Leaders As Our Guests
- On ABC 30 KDNL & NBC 5 KSDK - St Louis, MO

NFL Hall Of Famer Jackie Smith Talks About The NFL And The New America's Wall Memorial In Perryville, MO

Our Show Airs On NBC & ABC

Here Is A Complete Playlist Of Our Shows : CLICK HERE

The same networks as these shows:

Our Show Airs On ABC
The same network as: 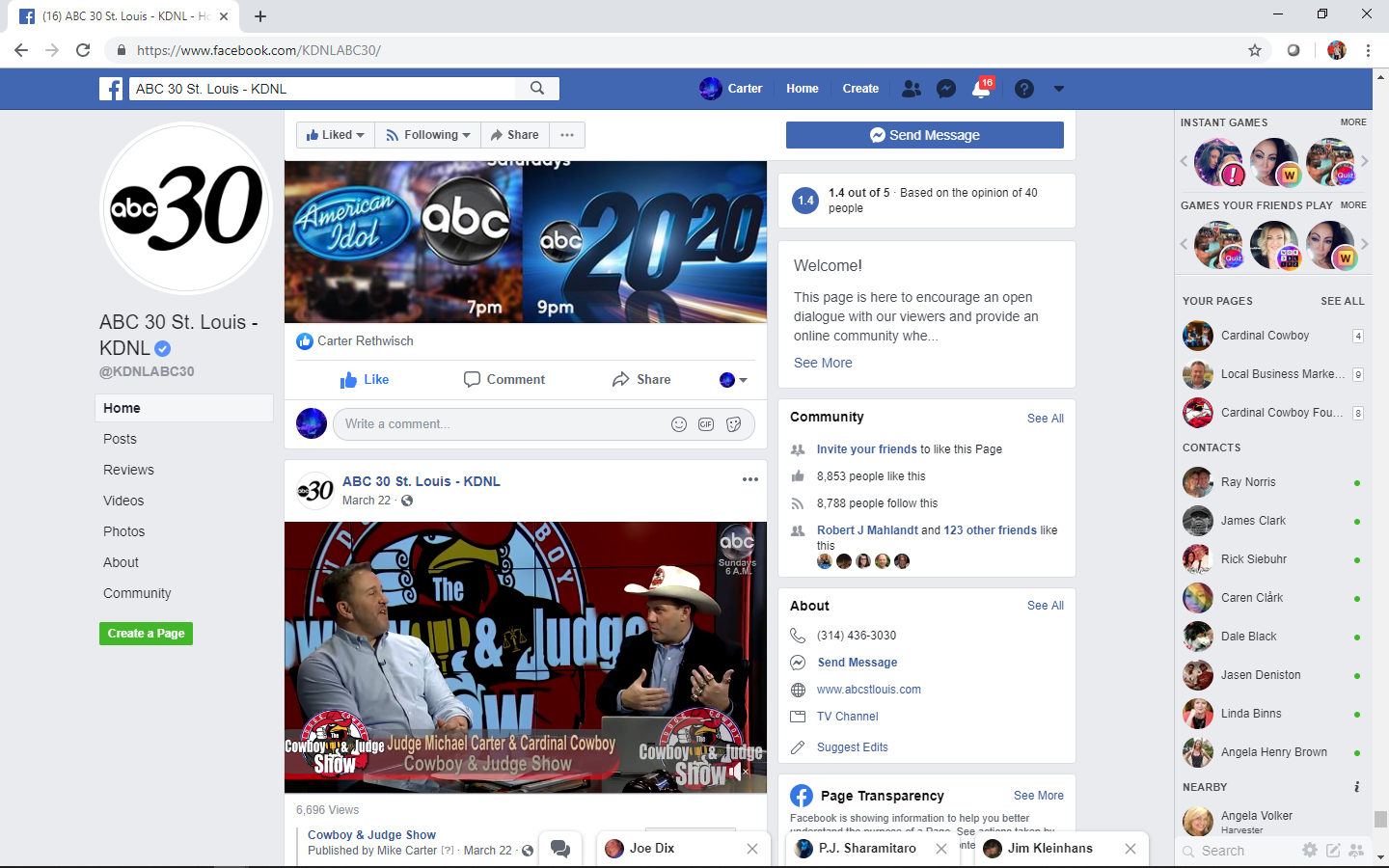 About Our Host & Producer - The Cardinal Cowboy - Click Here

About Our Executive Producer & Host - The Judge - Click Here

Know Someone Who Should Be A Guest?
Click Here To Submit A Great Guest

On September 21st of 1991 Carter was in a fatal accident that put him into a coma.. With less than 50/50 odds to survive, 7 days later, Carter broke his arms from the restraints and pulled the ventilator out of his own throat. Since this traumatic event and story of survival the Cowboy tours much of the country explaining to kids and adults that you can over-come and accomplish anything if you are just willing to "Never Give Up" and "Put In The Work"!

The Cardinal Cowboy, wants to share stories about people who have made Impressive Accomplishments in life, asking them to share their personal "Arc to Success" to show everyone that this IS ALL REAL and POSSIBLE.

We want to show these people who HAVE DONE IT and to explain HOW THEY DID IT!

With a Masters in Media Communication, and after 10 years managing the E-mail Systems for Anheuser-Busch and now 10+ years running digital marketing strategies up to over $100,000 a month Carter loves to help small businesses and organizations show off who they are..

In 2018 Carter finished ranked #1 of 882 advisors in one the world's largest marketing firms. Carter loves to help all of those in our community..

Carter, as the Cardinal Cowboy, visits and speaks to schools, universities, businesses and organizations sharing his message of beating the odds while also visiting kids at area hospitals keeping their mind on track to survive and thrive.

He has reached some incredible accolades, awards and goals (the Bob Emig Youth Sports Supporter Of The Year Award and the MO Brain Injury Association Service Excellence Award for Public Relations among others) along the way that many dream of all while helping people to realize they can surviv, pull through and be a great leader too.

Parents and now adult kids have come back to the Cardinal Cowboy some years later explaining that they themselves or their child was "ready to die" or was prepared to "commit suicide" until they met with and heard the Cardinal Cowboys powerful message of "Proving the Experts Wrong. and Chasing Your Dreams!"

Their are no holds barred when the Cowboy is asked to come change someone's life who is going the wrong direction. He will help anyone willing to do what it takes to turn their life around.

This will bring out the best that is the St. Louis Community and Cardinal Nation while helping to elevate everyone he comes in contact with.

Judge Michael Carter has lived in St Charles county since 1994. However he was born in North St. Louis County and primarily grew up near North Hanley & 270 in a highly integrated apartment complex by the name of Morningside Apartments. In the 9th grade his family moved off of Howdershell/McDonnell Blvd. while Carter attended Hazelwood West.

Immediately out of high school Mike started work in the family real estate business. After 5+ years in the trade (he is still a broker) Carter decided to complete his college education and pursue political science, philosophy, journalism, law, and marketing. During this educational trek Carter drove for UPS, bartended at Applebee's and worked for years as a graduate teaching assistant. (he continued to teach marketing at Mizzou & UMSL for ~14 years)

Ultimately, Mike obtained his bachelors in philosophy/poli-sci, juris doctorate, and masters of journalism from UMSL and MIZZOU.

After graduating Michael went to work for Fleishman Hillard in the Public Affairs department. However, with enough business coming in from family and friends the Judge started his own law Firm — Carter Law Offices, LLC in St. Charles, MO. (handling real estate, criminal, and corporate law)

Michael is the municipal judge of Wentzville, president of Carter Law Offices, broker of Homes USA, and general counsel / COO for one of the largest employers in the St Charles county area — recently negotiating the multi-million dollar deal to name Car Shield Field, the home of the River City Rascals.

In his many years as Wentzville’s municipal judge, Carter was ahead of the curve in implementing sweeping changes to Wentzville’s court before the advent of statewide senate bills 5 & 572 which ultimately brought the state’s municipal courts in line with Carter’s municipal court efforts. Area circuit judges have commended Judge Carter for his forward-looking efforts and wrote letters of accolades to his city aldermen and mayor to express such.

Judge Carter is concerned with the entire St Louis metro area and hopes to specifically draw attention to goings on in St Charles County — politics, charities, businesses, entertainment, sports, and more — because important specific local coverage for this county is something the area needs much more of.

This Is Our Studio For Our Upcoming Show Interviews

Fill out the show candidate! We will review the info!

Stay tuned for who we will select to appear with the time and location.

Then watch as we blast the show out to thousands and thousands of people!

This Just Got Exciting!

Who do you know that deserves the spotlight on THEM!?

Here is what this is all about: Imagine someone you know being on a broadcast having their message sent all around the world with a viral Social Media message that will elevate their message to change the world.

See what they are saying already:

"Here are just a few examples of what some of our guests have had to say about the show so far. I knew we had an audience!

We love to help leaders in our community shine, share the good things they know and see, and help others to do the same."

"I decided after years of following the Cardinal Cowboy to Team Up with Him!"

"I have seen the Cardinal Cowboy run around the entire Midwest promoting a positive message everywhere he goes. I need that kind of image as part of my profession and business.

So, I decided to see if he would team up with me. I am super excited about what we are going to be able to bring to the St. Louis community."

"After my interview on the show our business BOOMED!"

"Gaining the exposure that we were able to get by being on the show with the Cardinal Cowboy I gained 23 leads, just from the show airing once.

We are still getting new business from the interview and now have a partnership relationship with one of the best know personalities in the entire Midwest, the Cardinal Cowboy. We will use the recording of our video over and over again on our social media throughout the country."

"Just being on the show has given me a spotlight I can share."

"With the lights and cameras and the audience that the Cardinal Cowboy brings this interview gives me something to share on my social media to highlight what my business is all about.

The attention I will be able to put on my business is worth every second."

"Being on the Show was Awesome!"

"I was so excited to be on the show. They Cowboy knows how to bring out the best in what is going on. Now I have another great video that I can share to all of my Social Media. This interview is worth its weight in Gold!"

"Carter really highlighted what my business is all about."

"So many people really don't understand what my business does to help people. Carter made it very clear to the audience in a clip that I can now use for all of my prospective clients to see. Thanks so much!"

Listen to Dr. Mike Munro explain what sets his business apart.
- This video was from our pre-launch show interviews at a the local Brewskeez Bar/Restaurant in the St. Louis Area.

We are looking forward to helping highlight the good that happens, EVERY DAY, in St. Louis!

Tell us about the good that you know is going on!

"My goal is to everyday find some way to positively influence the life of just one person. If I can only do that my day, my week, my month, my year and ultimately my life will be a success.”

P.S.: And if we can get just a few influencers to join with us... just think of the impact we will have... #GiddyUp #CardinalCowboy